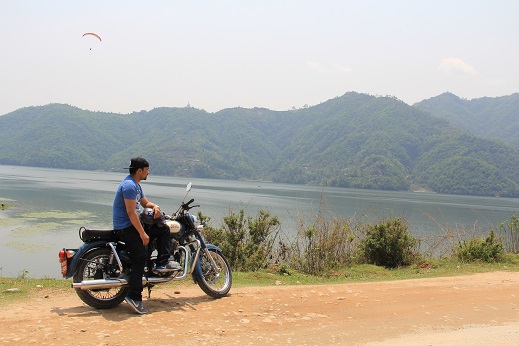 Blue colored Royal Enfield. 200 kms one way from Kathmandu to Pokhara. An adventure of a lifetime!!!

On the eve of the Nepali New Year 2074, I travelled with my brother, Amul Hamal Thakuri from Kathmandu to Pokhara on his Royal Enfield. The 200 kms distance took us past rice fields, small mountains, rivers, villages, towns and natural beauty only found on the base of the Himalayas. I had been to Pokhara before but not on a bike. Thus, the excitement to go on this bike ride was more for the journey than the destination.

It was Thursday morning. Around 9:15am. I’m doing my final checkup on the items to take for the trip. I meet Amul in front of his house, check that we have everything we need and take a selfie before embarking on our trip. Amul’s mother wishes us a safe journey from the rooftop. We are on our way. After getting the bike checked at the Enfield workshop at Balaju, we leave the capital a little after noon. Kathmandu is currently busy with a lot of vehicles and dusty from road construction and pollution and I say to myself  “it would be great to get some fresh air and come back to Kathmandu refreshed.”

The roads leading up to Thankot, the exit point of Kathmandu are not that smooth. Thus, I felt like I was going to get thrown off the bike a few times. With Amul driving and a backpack between us, I was at the edge of my seat and felt the discomfort in my lower back. Occasionally, I kept moving back and forth from my seat to ease the situation. As soon as we passed Thankot (video above), we were going downhill and it was more easier for me. On our way down, we drove past a forest fire that was being taken care by the firefighters. There was a lot of traffic-mostly from people leaving the capital for the New Year weekend. There was no way of reaching Pokhara before dusk on a car or bus with this kind of traffic and I was thankful that we were on a bike. We were able to maneuver through the gridlock caused by road construction and move faster. At one time, we trailed an ambulance which was given room to move ahead. After two hours on the bike, I suggested Amul to take a break and stop for lunch.

Our lunch-a platter of rice, vegetables, carrot and chicken curry was the perfect meal for us. I could not have been more satisfied and decided to go for a second serving of rice and curry. Our lunch meal comes out to less than 800 rupees (about $8). With our stomach filled, we head back on the road and the journey continues. Along the road, we stop to pay the road toll which is only 5 rupees for a two wheeler. We continue on our adventure and drive past Enfield riders who were participating on the Enfield Poker Run. Amul had wanted to participate in the Enfield Poker Run for a few years now and he was ecstatic to see the riders on the road. We stopped by a restaurant along the highway where hundreds of riders had convened and took pictures with them. It almost felt like we were on the poker run with them. Seated in the back, I took videos along the way and my phone was almost out of space by the time we reached Pokhara. As we go past bridges, curves, hills and valleys, we see a big sign welcoming us to Pokhara. It’s closer to 6pm and it took us over 5 hours to reach Pokhara from Kathmandu.

A few of my friends from Kathmandu to whom I had shared that I was going to Pokhara for the New Year weekend did not think Pokhara would be so busy as it is for the English New Year. I was surprised and far more delighted to see the throngs of people on the street as we made our way into lakeside. Pokhara was buzzing. Literally. We waited for Amul’s friend, Nitesh Shrestha at the parking spot to take us to the hotel. We reach Traveller’s Guest House and freshen up quickly before heading out to enjoy the evening. Nitesh recommends us to go to Trance, a restaurant cum lounge for dinner and to enjoy the New Year’s eve atmosphere. As we walk past the festive crowd on lakeside, I see hundreds of people reveling in the eve atmosphere. We order sphagetti and pizza at Trance. People are dancing outside on the grass and others are joining them. Amul and I decide to head back to the hotel to recharge our phone before stepping outside for the New Year’s Eve scene. At lakeside, I run into my coworkers, Sunita and Anjali who were also in Pokhara returning from their Mustang trek. We were both surprised to meet each other and decide to grab lunch the next day. We tried to enter Busy Bee, a popular restaurant/live music place which is packed tonight for New Year’s Eve party. Amul and I wish each other Happy New Year 2074 as we walk around lakeside and revel in the New Year atmosphere. This was my first time spending New Year’s Eve in Pokhara and it was a memorable one.

New Year Day 2074. We get up around 9am to the views of mountains and the Phewa lake. We walk past many restaurants and decide to have breakfast at Mike’s Restaurant, located on the edge overlooking Phewa Lake. This is a great view and we order Mike’s breakfast platter and start to make plans for the day. My coworkers whom I met last night text me saying that we will be meeting at Roadhouse Cafe for lunch. As I sit at Mike’s Restaurant, I reflect on the flexibility and peace of mind of not having planned too many things for this trip. I can actually relax and enjoy each moment without having to rush. After finishing breakfast, we walk around lakeside and see many tourists visiting shops and eating out at restaurants. Pokhara for me seeks like a very laid back version of Thamel. At Roadhouse Cafe, we surprise two other coworkers, Sushan and Sujan who had arrived Pokhara few hours ago on a scooter. We share with them the experience of riding on a Enfield to Pokhara and decide to later meet at Busy Bee. For lunch, we head to Pokhara Thakali Kitchen, a place that Amul was very impressed with the last time he was in town. Pokhara Thakali Kitchen is packed with tourists and locals alike. We get a platter of rice, lentil, cauliflower, chicken curry and papad. After lunch, we stroll the streets of lakeside and take pictures overlooking Phewa lake. The weather looked like it was about to rain so we head back to the hotel and rest. Later in the evening, we head to Nitesh’s home for dinner. His parents were gracious to host us for dinner and we had a variety of delicious food. We then make our way to Busy Bee.

There is light rain tonight in Pokhara. I’m thinking Busy Bee will be averagely packed but am surprised to see the place just buzzing. My coworkers from lunch are already at Busy Bee finishing their dinner. There is live music playing on the right side of the restaurant’s entrance. We head over there and enjoy the live music with Nepalese rock stars-their hairstyles reminding me of Axl Rose from Guns N’ Roses. After enjoying a few hours of live music, we danced our way into the night with the club music playing. People from different races and ages are all dancing in their own tunes in the dance floor. It was a night like no other and we thoroughly enjoyed it. We returned to our hotel and slept like we had just conquered the night life of Pokhara.

Mornings are such a beautiful treat in lakeside-the views of the mountains, clean air and almost no noise pollution makes any traveller extend their stay. Our friends in Kathmandu had recommended us to visit Dunga Restro and Lounge Bar on lakeside which was supposedly the new restaurant to check out in Pokhara. We make our way to Dunga (meaning boat in Nepali) for breakfast. The stairway leading to the restaurant situated on the 1st floor gives a pleasant view of the lakeside streets on one side and the view of Phewa Lake/mountains on the other side. We order ourselves the Dunga Breakfast platter (about $4) and take pictures around the restaurant while waiting for our food. The Pokhara hospitality is on display as the restaurant staff politely ask where we are coming from and provide us information on the bands that played on New Years Eve at the restaurant. Our breakfast platter is here and we devour it. We rave about each item on the platter – toast, sausage, eggs, potatoes and coffee. We head back to the hotel, pack and pay for our stay (about $30 for two nights). Then we head to Pame, located on the outskirts of Pokhara’s lakeside. On our way to Pame, we notice many people paragliding and park our bike where the paragliders land. It’s almost like a beautiful dance to see the paragliders move in the sky and land effortlessly on the grassy land at Pame. As we spend close to an hour at Pame, we see between 25-30 landings and each photograph turns out to be an amazing postcard representing Pokhara.

Hoping to reach Kathmandu right before nighttime, we head back to the hotel, pick up our backpacks and leave for Kathmandu. We drop off a backpack at Nitesh’s premise and thus the ride back home is more comfortable. We fill the petrol, get the tires checked and head to Begnas Lake, another popular freshwater lake which is located 10km southeast of Pokhara. Begnas Lake was filled with many locals and a handful of foreigners. Many locals were getting ready to get on the boat while others were walking around the lake. After strolling the elevated pitch around the lake, we get back on the bike and on the road again. We stop at Mugling, a well known junction for travellers commuting between the three major cities-Kathmandu, Pokhara and Chitwan. We had a late lunch of buff momos and chowmein-both tasty and filling. After few more hours on the bike, we reach Kathmandu a little after 8pm and the journey of a lifetime comes full circle. I’m tired, hungry and exhausted by now. However, I will forever cherish the experiences, memories and adventures from this Royal Enfield trip from Kathmandu to Pokhara and back. Happy New Year 2074.

Things I realized or discovered from this trip:

Most of us go on trips with an itinerary on hand and want to check off all the things or as many things as possible on the list. Yes, there are times to do that but once in a while you should go on a trip without planning too much. I was sipping the coffee at breakfast besides Phewa lake and enjoying every sip without feeling the rush to move on to the next activity. The whole trip felt like that breakfast moment.

Life is a journey not a destination. The adventure and excitement of going to Pokhara and coming back to Kathmandu on the Royal Enfield was definitely the highlight of the trip.

Go with your intuition and the rest will follow. Going on this trip just felt right from the beginning and we were very lucky to receive many help from people along the journey (friends, locals and strangers).