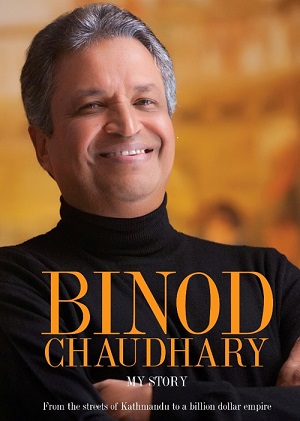 Binod Chaudhary My Story From the Streets of Kathmandu to a billion dollar empire is a story of one man’s ambition, determination and vision.

Binod Chaudhary’s autobiography provides insights into his childhood, business ventures and plans to extend the Chaudhary Group (CG) brand globally. The entrepreneur provides historical context to how his grandfather moved to Nepal from Rajasthan when he was 20 years old. Early business experiences of the author’s grandfather setting shop (Juddha Sadak) in 1934 to his business prowess is shared in the beginning chapters. I loved the anecdote of grandfather opening his shop early in the morning to casually interact with the locals and building relationships. It was a smart exercise in public relations. After grandfather’s passing, Binod’s father Lunkaran Das Chaudhary worked to expand the business delving into exporting jute, construction and flooring and furnishing store. Arun Emporium was the most successful venture out of those.

The author talks about growing up in Kathmandu, his early interests in music and cinema and how he got into managing the family business. I was keen to learn about the origins of Wai-Wai, the popular noodle brand. Until I read the book, I had associated most of the entrepreneur’s success because of Wai-Wai but Wai-Wai is only one of the businesses of the Chaudhary empire. The author touches on his encounters with politics, FNCCI, CNI and relationship with the then royal palace. He also highlights his relationship with many world leaders. In particular, the story of Jeet Bahadur whom Narendra Modi treated like a son is shared. Jeet Bahadur’s story gained national headlines in 2014 and it’s good to know that he was reunited with his family. There is a chapter on the author’s guru, Sri Sri Ravi Shankar and how he become an ardent follower of him.

The professional battle stories of Binod Chaudhary showcase the entrepreneur’s business prowess, strong resolve and sheer will to get things done. Stories of Nabil Bank, Butwal Power Company and Mahalaxmi Sugar Mills are shared. A chapter on the start of a MNC highlights the foundation of a multinational company in Singapore with seasoned foreign entrepreneurs. Binod elaborates on a provision pertaining to Non resident Nepalis (NRN) in the Income Act which is worth mentioning. A Nepali who lived outside the country for more than 183 days a year was an NRN in the eyes of the law and thus he or she was free to invest abroad. Binod’s sons Rahul and Varun look after the business interests outside Nepal as NRNs. The later chapters go into the multinational journey of CG from the partnership with Taj, CG Hotels & Resorts (200 hotels by 2020) and the creation of CG’s first global hotel brand – Zinc.

I also liked the Business Mantras section where Binod dives deeper into the qualities and skills that an entrepreneur should possess such as high ambition, building organization, market astuteness, discipline, and negotiation skills among others. Besides sharing his achievements and accolades, he also reflects on the business opportunities he missed and regrets making a few bad business decisions. Self-evaluation section provides an introspective assessment of the author himself and is commendable.

For aspiring and current entrepreneurs in Nepal, the author’s insights and experiences with the Nepalese government, political parties, local competition among other activities present the reality of doing business in Nepal. Despite the abundant challenges that most of us know that exists in Nepal, Binod Chaudhary and the Chaudhary Group’s success domestically and internationally is inspirational in summary.

The author presents challenges for Nepalese entrepreneurs to invest abroad and how he had to find ways to do business outside of Nepal. There are plenty of examples shared of investment friendly countries and their leaders who welcomed Binod to open factories, hotels and plants in their regions. Much can be learned from Binod’s business experiences for the Nepalese government. Some areas where the Nepalese government and relevant ministries can help the country are 1) make legislation better/easier for Nepalese entrepreneurs to invest abroad 2) create an investment friendly climate in the country and remove government redtape 3) have a strategic vision for the country.

Binod Chaudhary’s autobiography is a very good read for someone to understand how the entrepreneur built a billion dollar empire. A must read for the youth of the country and for aspiring/current entrepreneurs who want to build a multinational company from Nepal.

Binod Chaudhary My Story From the Streets of Kathmandu to a billion dollar empire is published by Nepalaya.